After a lifetime of reading H. C. Andersen's fairy tales, I am convinced that the language he uses in his tales does not only enable the young or old readers to believe in the world of make-believe, but that they are actually educated.

One of my former colleagues, Mr. Vincent Bosman, suggested that I should title my contribution, "H. C. Andersen, the missing link in world education".

The language Andersen uses in his stories does not merely tell interesting and readable stories, but it projects various aspects of culture, paints vivid pictures, creates dramatic situations by means of words. However, what I actually find most inspiring, are the possibilities that many stories present of being used to be correlated with school subjects in almost any country in the world.

To illustrate my findings I have selected four tales. My first choice is "Hvad Fatter gjør, det er altid det rigtige", "Dad's always right".1 In this story, which, according to the author, is a folk tale, he creates such an imaginative picture of the living environment of the old couple, that one can see it, and I'm sure any fine artist would be able to paint a marvellous picture of it.

I take it for granted that you have been in the country, and seen a very old farmhouse with a thatched roof, and mosses and small plants growing wild upon the thatch. There is a stork's nest on the summit of the gable; for we can't do without the stork. The walls of the house are sloping, and the windows are low, and only one of the latter is made so that it will open. The baking-oven sticks out of the wall like a fat body. The elder-tree hangs over the paling, and beneath its branches, at the foot of the paling, is a pool of water in which a few ducks are disporting themselves. There is a yard dog too, who barks at all comers.

In addition H. C. Andersen creates amusing and interesting dramatic situations in the same story. There are, for example, the incidents in the inn when he makes a bet with two Englishmen that his wife would approve of his trading achievements, e.g., returning with a bag full of rotten apples in exchange for a horse, and finally, the result of his confrontation with his wife in the presence of the innkeeeper and the two Englishmen. The dialogue is simple and straightforward but it leads to a surprising conclusion.

"Yes, but I swopped the hen for a bag of rotten apples." "Why, now you must have a kiss," said the wife. "Thank you, dear husband o' mine. And now I've got something for you to hear. While you were away, I thought of a really nice meal to cook you when you got back: omelette flavoured with onion. I had the eggs, but no onions. so I went across to the schoolmaster's; they grow chives there, I know. But his wife's stingy, the mealy-mouthed vixen! I asked her to lend me - 'Lend?' she repeated. 'Nothing grows in our garden, not so much as a rotten apple. I couldn't even lend you that.' Well, now I can lend her ten - in fact, a whole bagful! What a lark, Father!" And then she gave him a kiss right on the mouth.

To ensure that this story will be read analytically, a teacher could encourage students to read the story again, employ thinking skills to supply verbal feedback to questions such as: "Which aspects of the story are: (i) positive; (ii) negative; (iii) interesting."

There is also the possibility of discussing the possibilities of whether Andersen is poking fun at husband and wife relationships or revealing male chauvinism or whether he is moralising on male-female attitudes in wedlock.

The second story I have selected is "Krøblingen", "The Cripple". A good example of an imaginative picture description is the following extract:

The cage stood on the chest of drawers; the cat stood on the floor with its greeny yellow eyes fixed on the bird up there. There was something in the cat's face that seemed to say to the bird, "How lovely you are! How I would like to eat you!"

The scene is so clear and it sets the stage for the drama that would ensue.

What follows is indeed a dramatic situation loaded with suspense, agony, anger and a victorious conclusion; when the author states:

The tears were now streaming from his eyes; he shouted for joy; crying out loud, "I can walk!" He had got back the use of his legs. Such things can happen and it happened with him.

This story projects so many characteristics of true life situations prevalent in even the societies of today.

H. C. Andersen overplays the good qualities of the inhabitants of the manor house and the schoolmaster. However, he strikes home a universal truth. Physical disability is remedied by a mental shock. The endangered life of the bird shocks Hans out of his own lifeless existence into action. The bird dies of fright but life is restored to Hans's useless legs. The miracle symbolises an underlying belief that something or somebody could die to bring salvation to the poor and the suffering.

To the reader and the student H. C. Andersen emphasises the value of reading. Hans reads stories to his parents which brings laughter and inspiration into their humdrum lives. Similarly the author empowers the reader by communicating enriching ideas, such as: "Why, it's just as if Hans was to read it to us out of the story book."

My next choice of a fairy tale is "Den grimme Ælling", "The Ugly Duckling". This is a story of worlds. Any teacher who allows his students to read this story would soon realize the possibilities of correlation with other school subjects contained in the story.

Emphasising the mentioned "worlds" could be related to our own environment in relation to the greater world out there. More than one geography lesson could be derived from "the stork who can speak Egyptian" and the older duck "with Spanish blood".

There are unlimited possibilities for drama in the story. Consider, for example, the conversation between the hen, the cat and the ugly duckling, prior to the latter's decision, "I think I'll go out into the wide world."

In addition this story lends itself to a descriptive lesson on the sequence of the seasons in the southern countries and climatology. The story begins in the summer, and the ugly duckling flees through autumn, winter into a beautiful spring; with the discovery of its true identity.

Finally I would briefly like to refer to the story "Nattergalen", "The Nightingale". In this fairy tale H. C. Andersen's reverence and admiration for the monarchy, their palatial abodes and gardens extend to the Far East.

There are once again imaginative pictures painted in words; for example,

The garden was full of the rarest flowers, and the loveliest of these had little silver bells tied to them which tinkled so that no one should go by without noticing them.

If you kept on walking, you found yourself in a glorious wood which went right down to the sea, which was blue and deep; big ships could sail right in under the branches of the trees. Here lived a nightingale that sang so beautifully that even the poor fisherman who had so much else to see to, would stop and listen.

Once again the author creates various dramatic situations by means of dialogue. A good example is the instance of the conversation between the Emperor, after his rescue from the claws of death, and the nightingale. 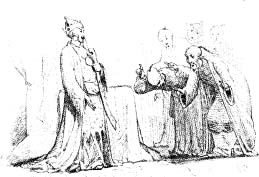 Therefore I would try to do as much as possible to demonstrate that reading H. C. Andersen's fairy tales could become a valuable teaching aid to students to acquire information about other school subjects in schools all over the world.

1. English title from R. P. Keigwin's translation, 1986. In Great Stories of All Nations, an anthology selected by Maxim Lieber and Blanche Colton Williams (George G. Harrap & Co., 1927) the title runs: "What the Old Man Does is Always Right". back

Bibliographic information about the text: