March 2005: Second edition of the book has been issued, with another cover and another price: DKK 199. 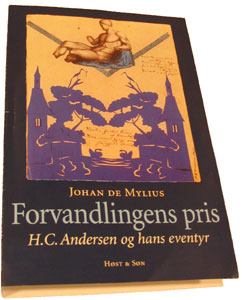 Trial print of the jacket

In the literature on Andersen, while there is a plethora of biographies and various works with a biographical slant, there is a distinct lack of major literary studies of the tales. Including the forthcoming book there have been no more than some eight or ten since 1907, when the foundation was laid with Hans Brix' doctoral thesis. It is characteristic of the situation that the standard work must still be said to be Paul V. Rubow's H.C. Andersen' Eventyr with the subtitle "Forhistorien - Idé og Form - Sprog og Stil" (Hans Christian Andersen's Fairy Tales - Idea and Form, Language and Style 1927ff.), a book, which, however, characteristically for its time and author does not engage in literary analysis of the tales.

In Forvandlingens pris (The price of transformation) the point of departure is the question as to how Andersen's tales and stories actually are stories, how they relate to being narratives, or whether they are moving in an entirely different direction. Against this background Andersen's aesthetics are described in their transformation from the early texts from the 1830's to the late stories, and the aesthetic perspective reveals a vista of the modes of perception and philosophy of life, including Andersen's religious ideas - which in turn are seen to have consequences for the way his stories are stories. Or perhaps their inability to be stories in the classic way.

Andersen is seen to be a writer who takes his genre beyond its natural limits and gradually develops for prose forms which are visual and image-centred, picturesque, indeed even musical. Thus he dissolves rather than completes the narrative or the story/fairy tale as genre, and throughout his work he increasingly appears as a precursor of certain forms of modernism, though these belong to a much later period. Andersen is at the crossroads between an established form of literature, and one whose contours he can only dimly perceive. It is in this space between the old and the new that he creates his very varied texts, a workshop and a playground for visions that have come into being at a time and in a century which he fully identified with - always looking towards the future, however. As he wrote in "The Dryad" from 1868:

A time and a fairy tale which, however, cast a shadow, contained in itself a spirit of dissolution which Andersen also had to describe. In him we find both a search for le mot juste and a desperation at the distance and the fragmentation. He is a poet in his time, but in every sense of the word he tries to transcend the limitations of time, at which point he is forced back again.

When faced with an author as creative as Andersen an analysis of meaning is not enough. Consequently, a number of the tales and stories are here discussed on the basis of recurring problems and issues, which open up for both what is artistic and productive and what conveys the meaning of the texts. In the modes of perception behind them this is understood as the unity of aesthetics and meaning, which is examined in this book with a view to elucidating the inner nature of the texts and their presuppositions and consequences.

The Book presents a comprehensive aesthetic, literary-historical and in part also psychological and existential reading of the oeuvre, and thus a reflection on the idea of Andersen, or perhaps even a construction of Andersen. This takes place in a number of analyses and general observations (also drawing on texts from other parts of the oeuvre), divided into five main sections. The main concepts and the basic vision of the present work on Andersen and his fairy tales are conveyed in the first part through analyses of texts from both the beginning and the end of the collected tales. The transformation or even disappearance of the tale or story becomes the key that unlocks the ideas of the intensity of the moments of death, transformation and rebirth, which are the main themes of the book.

In the second part the aesthetics behind especially the early phase, the 1830's, are considered; it is here that Andersen's basic tendency towards transformation and redemption already begins to form, colouring the story as history. Picture-Book without Pictures is also considered here as a work belonging with the tales, and the aesthetic and psychological observations are introduced through a reading of "Dødningen" (The dead man) and "The Travelling Companion", not as two stylistically different versions of the same text, but as two independent texts.

The third part follows Andersen's aesthetics as they develop in the direction of pre-modernism, at the same time opening up for an explanation of the transformation which can be observed, from a perspective opening towards the city and the time as minefields of problems Andersen had to confront and which he reacted to in his work.

Thus the fourth part finds room for a more concrete view of the way Andersen uses his 'stories' to interpret his time and society and to look at what really happens to the said 'stories' when they rewrite and interpret material from history: how does Andersen transform real history into a story? And how in its turn does this transformation modify the genre of 'history'?

However, all is not and should not be seen as the fault of the times, the town or contemporary society. These factors contribute to the final result, but more is at stake.

Therefore the fifth chapter takes up a number of underlying existential, psychological and religious factors, which have already been present in some of the preceding chapters, but which are here treated more comprehensively and exhaustively, till the drive towards rebirth can be identified as one of the most central aspects of Andersen's work found repeatedly in its imagery and its view of life - and thus also in Andersen himself. The Ander­sen who has been visible throughout behind the analyses and the general characterization of his tales and stories.

This is far from being a biographical reading. But the reading is relevant for the understanding of the Andersen who wrote the tales and stories.